To call 2013 an eventful year would be an understatement. Just nine months ago Battenhall launched, as a new agency to the market, offering clients communications consultancy with deep social media expertise. As a team we were reflecting earlier this week on how 2013 went and how next year is going to shape up, so I thought I would share the story so far.

We have grown from a team of one to a team of 12, all based in London and with a very global outlook, speaking seven languages and travelling overseas to carry out two global briefs so far. We are now on to our third office, outgrowing the first two a bit quicker than we first thought.

2013 was a year of big events at Battenhall. We hosted one of the opening events of Social Media Week London in September, which we had planned to run in our company meeting room. When 800 people registered to attend, we could see that we'd need a bigger venue. We ended up filling the Royal Institution of Great Britain's Faraday Theatre in Mayfair. The event was covered by the FT, The Guardian, Metro and, of course, on the blogs. We were referenced widely in the press this year, something I'm humbled by. The FT wrote about us twice, the other article being about our workplace culture, and we made it on to the BBC to talk social media trends on TV too. 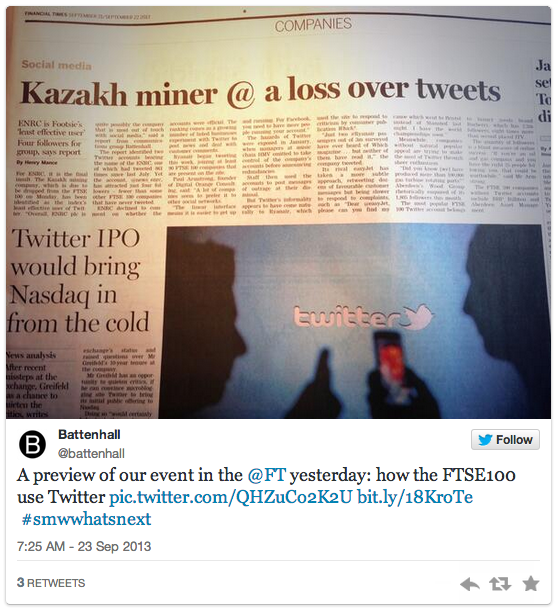 We published our first major, independent body of work in 2013, a research report into the FTSE 100's use of Twitter and social media. We also published 10 editions of our long-read social media trends newsletter, the Battenhall Monthly. That was on top of 100  posts on our company blog.

The six public job openings that we advertised on our site received 181 formal applications. Although as you'd expect with a social media agency, most of our recruitment is done through Twitter, which helped us grow the team through our network. The talent market really is hot right now it has to be said.

We built and launched two digital products this year for our clients, both of which are out in the open, and two more internally for our team. This is something I'm very proud of as we have developed a design and build capability in-house faster than I thought we could have done this time last year. We have many more digital products in the pipeline, so watch this space in 2014.

We have also broadened out our remit with clients way beyond social media and comms. 50% of our clients retain us to run all of the PR, comms and digital. 10% and growing ask us to manage their above the line campaigns. And we have undertaken 'social business' projects working with planning departments, recruitment and fundraising teams to bring the benefits of social media to entire businesses.

It's not so fast that an agency can start receiving awards, but accolades have started to appear. The biggest of the year was when Battenhall's Anton Perreau was named as one of the PR industry's top young talent, in PR Week's 30 under 30 just last month. I have also had the pleasure of being a judge for the UK Social Media Awards, the Association of Healthcare Comms & Marketing Awards, speaking at delegations at the CIPR and PRCA, and just about managing to keep a foothold in the PR Week Powerbook, when Battenhall was less than a month old. We now have a broad range of clients, some FTSE 100s, some challenger brands, but all of them see the world from the same perspective that we do. Social media and digital are disrupting the media landscape, entire business models, and the communications agency of the future needs to nail the essentials but also have one foot firmly planted in the future. So in 2014 we will continue to seek innovation, both with our clients and in new services, industries and markets that we expand into. It will be our first full year and we hope to be able to count on your continued support for team Battenhall. We can do anything with a bit of support.